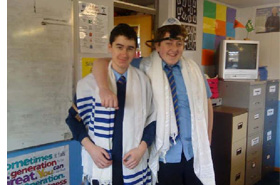 The society in which we live is changing. Britain and Wales are fast becoming a multicultural society with a vast array of languages, traditions, religions and cultures. In order for everyone to co-exist, it is essential that our pupils are aware of these traditions in order for them to grow into well balanced, tolerant citizens.

The Religious Studies Department provides the essential information for the pupils. We discuss moral, cultural and religious issues, and introduce the reasons for doing certain things in order to celebrate differences rather than be afraid of them. 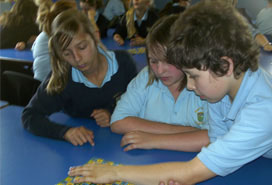 We mainly study Christianity, Hinduism and Islam. The main focus in years 7 and 8 is Hinduism and Christianity, by looking at worship, ideas about God and the main mile stones in the two faiths. In Year 9, we look at the various beliefs people have regarding God, the role of religion within our society and how people are affected by religion. The pupils receive several opportunities to take part in various activities, pair and group work, discussions and presentations, creative work in addition to several thinking skills based tasks in order for the pupils to familiarize themselves with the basic content of the lessons and ensure that the have solid knowledge of religion in our society in this century.

Religious Studies is compulsory in KS4 and the department offers two courses. The pupils can, depending on their set, sit a short course G.C.S.E that looks at maters regarding Religion and Medicine, War, Expression of Faith and Religion and the state - this course will last two years.

The second option that is offered is a Pathways qualification in Humanities. This is a personal study based curriculum which is assessed by coursework tasks. Religious Studies, History and Geography units will be studied over two years. Work will be submitted twice yearly and the students will receive a statement of credits throughout the course.

The students in years 12 and 13 follow courses offered by the WJEC. In Year 12, the students study two modules, one that looks at the Buddhist religion, by concentrating on the founder, the Buddha, his teachings and guidance for life, worship and meditation and the role of the Buddhist monks, the Sangha. The second module that is studied is Religion within the Contemporary society. Within this module, students have the opportunity to study the role of religion within the media by looking at soap operas, The Simpsons and religious specific broadcasting. The role of religion within medical ethics is studied by looking at Euthanasia and the arguments surrounding the role of animals in our society. There is also an opportunity to study philosophy of religion by looking at two important figures, Freud and Jung. Students also study to what extent religion has lost its appeal today and the role of New Religious Movements within our society.

In Year 13, again two modules are studies. The first is a Synoptic unit that is mainly a personal study on Life, death and life after death. The students have the opportunity to study more independently by researching for an extended essay that will be written under exam conditions. The main focus will be and how beliefs in the afterlife within at least two religions effect individuals behaviour in the present. The second module is a continuation of the study of religion in contemporary society. A section of this further study is how religion and faith communities are portrayed within film - Bend it like Beckham, East is East and Solomon and Gaenor, how religious themes are interlinked within films such as The Chronicles of Narnia and The Matrix. Students also add to their understanding of the philosophy of religion by looking at the ideas of Karl Marx, Weber and Durkeim. The students also look at sociological theories on religion and the effect that religion has on the individual and how religion has led to theories on psychological health. The role of religion within the state is also studied and weather the government has the right to control people's religious ideas.

Due to the fact that RE is a statutory subject throughout a pupils school career, in Years 10 and 11, G.C.S.E or Pathways courses are followed in response to this requirement. In Years 12/13 religious education is studied as part of the Welsh Baccalaureate course.